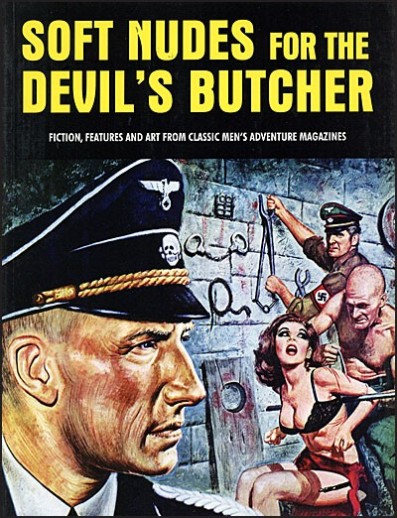 Take novelist Jennifer Hills from Meir Zarchi’s I Spit on Your Grave, transport her back in time to the American Civil War, and you’ve got an accurate portrait of Charlotte Randolph, the protagonist/femme fatale in Gary Lombard’s “Lust Vengeance of the Rebel Wanton.” Originally published in the May 1961 issue of Man’s Story, this piece of historical sleaze fiction pulls no punches. The Union may have won the war, but this Southern belle claims many a battle as she seeks revenge for the destruction of her beloved South. Using her nubile, twenty-two-year-old body as bait, Charlotte lures many Union soldiers to their deaths, severing countless Yankee cocks with impunity.

While Zarchi’s leading lady is brutally raped by a crew of rednecks, Charlotte narrowly escapes the same fate, bayoneting her attacker before slashing a second soldier in the process of torching the family mansion. This graphic scene opens the story, dropping us in the middle of the frenzied action as our highly capable heroine flees a fallen Atlanta: “Drunken Union soldiers emerged from the surrounding houses, their arms laden with silver, clothing, liquor and every other bit of finery they could carry.” A brief flashback follows, providing an economical character sketch of Charlotte which blasts the stereotype of the helpless, brain-dead Southern Belle. Charlotte may be young and beautiful and privileged, but she is also “something of a spitfire, delighting in breaking a full-blooded stallion or a hot-blooded man to her will.” Full of spunk (pun intended) even before the Civil War, the horrors of the conflict have made her even more fiery and determined.

Charlotte’s third kill is rendered in a fully developed scene, an effective set piece in which we witness her modus operandi. Standing on the side of a dirt road, brazen and none too subtle (the rural equivalent of a 42nd St. hooker), she works her magic on a “half-drunk scout of the Third Illinois Brigade” who just happens to cross her path. Like a charismatic Ted Bundy convincing a coed to hop in his car, Charlotte dupes the horny solider with ease, bringing him back to her room at a nearby wayside house where the clothes come off. On the cusp of getting some prime Southern snatch, the Yankee soldier can hardly believe his good fortune; until his seducer’s mask comes off and she reveals her true nature. The bayonet comes out of hiding and Charlotte proceeds to butcher her beau with unchecked savagery: “Not satisfied with feeling the sharp blade sink into his unsuspecting back, Charlotte did other things to him before death closed in on the soldier. She howled with glee as she removed the last vestiges of his manhood.”

As if slicing the poor guy’s salami weren’t enough, Charlotte claims his Joanne rifle and heads east, leaving “butchered cadavers” in her wake. Baffled by the growing body count, the Union forms special task forces to hunt down the mysterious offender, a genuine serial killer in their midst. The final showdown occurs in an Augusta farmhouse where Charlotte has lured her final victim, a deserter being pursued by “Sherman’s marauding forces.” After spotting the fugitive entering the farmhouse, a lieutenant fires a warning shot into the air, triggering a blazing exchange of gunfire between Charlotte and the soldiers. She puts up one hell of a fight, repelling her adversaries as long as she can before eventually succumbing to their military might. Of course the soldiers are shocked when they enter the farmhouse and behold the grisly tableaux: “The deserter’s corpse lay on the bed, its arms wide flung, blood covering its obscene wound.” Compounding their confusion is the rifle-clutching young lady by the window, beautiful but decidedly dead. It’s unclear whether Charlotte shot herself, or was killed by her foes, a dash of ambiguity to conclude an otherwise straightforward revenge story.

Read it, get tanked on Southern Comfort, and crank up Billy Idol’s Rebel Yell.

Can’t track down this issue of Man’s Story?

Hell, I couldn’t either.

At least not an affordable one.