Sign on the freeway: silver alert.
Another elder said fuck it,
got into a red 2004 Ford
threw IDs out the window
and jammed the accelerator.

She took 1-90 east and
headed for the opposite coast,
laughing as she fiddled with the radio.

Relatives twisted napkins in knots
and punched numbers onto cell phones:
all of them beside themselves,
screaming at law enforcement for help.

Mom should be there for the grandchildren.
Dad needed to stay, so others
could feel superior to him.

Instead, flagrant disregard.
Mom and Dad have fled the scene
like teenagers, but in separate cars.

Dad split six months ago,
and no one ever found him.
He’s an adult and entitled to leave,
even if that does make him
a self-centered bastard.

After a while, we gave up looking.

When Mom left on New Year’s Eve,
the last day of the decade.
she swore she’d head straight into 2020,
and as far as I know,
she hasn’t stopped driving.

The driver:
He’s got the best chance
at survival in a car crash

Having the seat belt on
also helped immensely

Knowing that the accident
would happen was also
a plus

Yep, the only minus of the situation
was having to pretend
he had PTSD and depression
and whatnot
for causing the deaths
of three close friends 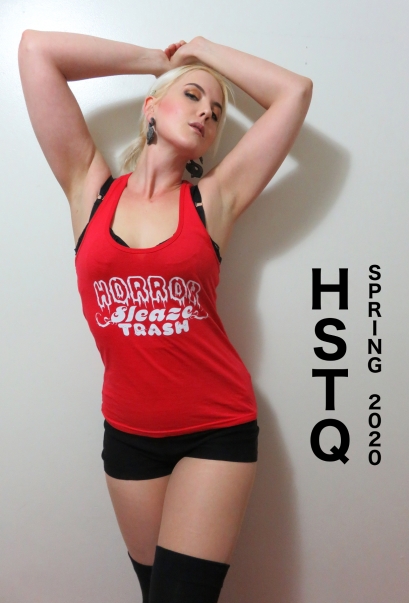 Welcome to HSTQ: Spring 2020, the curated collection from Horror, Sleaze and Trash!

Kindly PayPal 5 USD to arthur.graham.pub@gmail.com for print copies,
or download the FREE ebook instead!

at such a young age

and no one can afford just
one night any longer either

the tornado broke the town

the mass shooting decided
to end it once and for all

the river is full of poison

and god has moved on to
fuck over the next county

Daniel Ortiz is a self-taught artist from Albuquerque, New Mexico…a beautiful place where saints jack off in the sky and history hangs from the walls like quiet screams.

He lives to make art, but it’s not what he does for a living. He’s a slave to the eight hour day, like most of us are…but he’s hoping for a way out, in more ways than one. 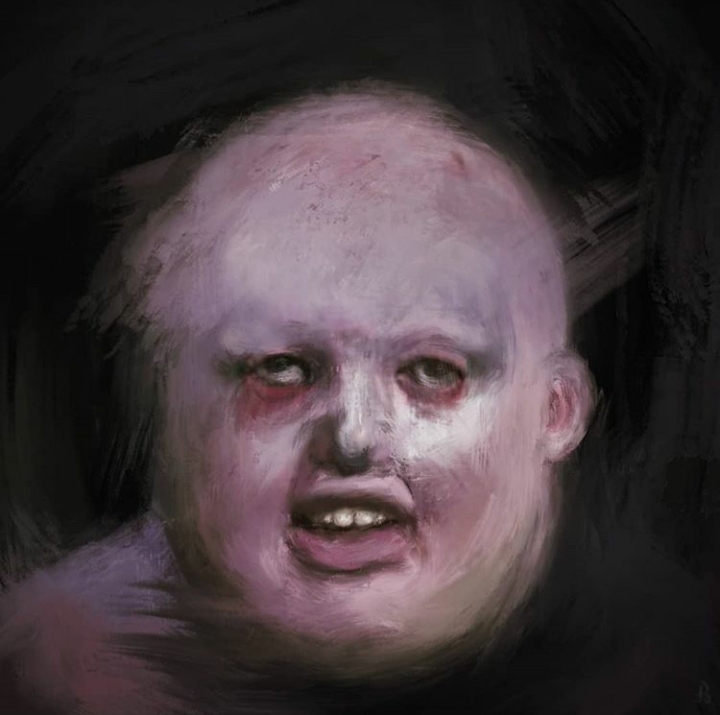 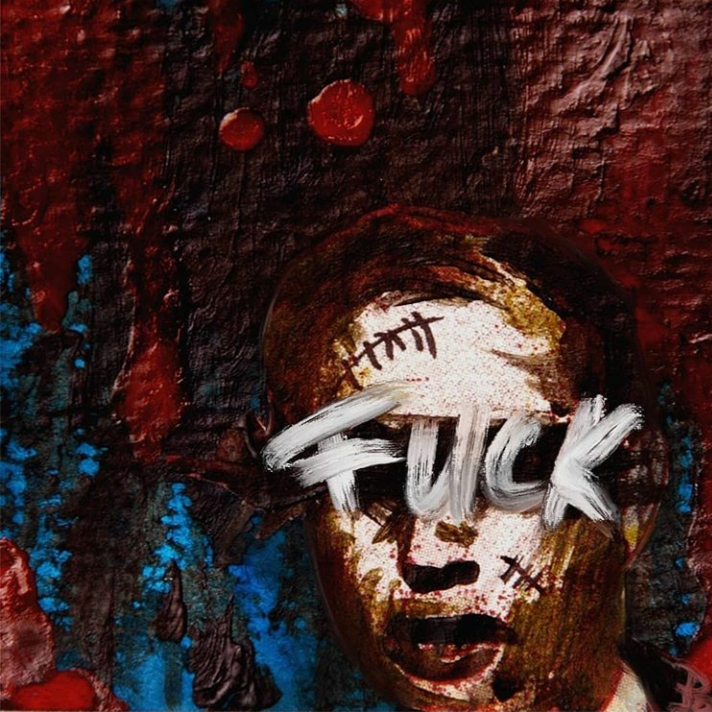 She comes up out of the sea
and she is all blond –
she has lost her bikini;
the shark of her smile took it. She
reaches back; wrings brassy hair
in a wet mass. She wants to come over,
primp, turn around – pray her ass be kissed.
Her eyes glint sea-green; her breasts float
large and gently sloped as distant breakers;
nipples buoys; bush surf white. She
straddles the screen. Between the crack
of her butt you glimpse a sunsquint;
close eyes to sniff the vision burst.
Your throat detects encircling cigarettes
and bad cigars, old coats, stale popcorn;
knees cracking; torn leather seats creaking…
Open the eyes – to catch a last sneer,
as she steers her posterior down on the
mouth of the camera, turning all dark
in the must you breathe.

I took her in the ass because she asked me to.
And because I was curious, actually enjoyed the novelty.
As did – or so it seemed – she.
Her way of asking: “Ever put this in a woman’s ass?”
I cleared my throat… let a few seconds drift,
as if reflecting… “Once or twice.”
She shrugged, disappointment evident;
she obviously eager to deflower.
I should have lied. Given her the triumph.
Today I learn she died six months ago. Cancer. Fifty-six.
All those cigarettes. All that love. But now she has taken,
at least in one sense, my virginity;
as I take the news up the ass of my heart.

Why was there a poster in his room
that said FADE AWAY?

52 years and nothing done
Nothing worthwhile anyway

But values change, man
Oh, how they change

How Mrs. Steinmetz Got Her Mink

Every day on her way to work and back, Mrs. Steinmetz stopped in front of the shopwindow of Vanderbolt Furs. Beyond the plateglass, mannequins stood frozen in elegant poses, swathed in ocelot, seal, beaver, chinchilla, ermine, but most of all, mink. Mrs. Steinmetz stared, and became a dummy covered in lumpy tweed and left outside to endure the wind that howls down big city avenues. Then a truck engine would backfire, or some workman or cop would shout, and the near-frozen woman would awaken and walk the rest of the way to her dimly lit tenement room.

Dinner was usually a can of soup heated up on the radiator. Mrs. Steinmetz listened to the radio while she ate, and often fell asleep to swoony brass choruses and whispered melodramatic dialogue.

The shopkeepers at Vanderbolt Furs changed the window display every Thursday. Thursdays were holidays, for Mrs. Steinmetz.

Hypnotized by a velvety knee-length model, she didn’t see the black sedan pull to a stop behind her in the street, didn’t hear its wide tires crunch the snow piled by the curb. The man sitting in the back of the car rolled down his window. The end of his cigar glowed like a lustful eye in the winter evening.

Mrs. Steinmetz was plain, but she had lovely skin. Cheap clothes couldn’t conceal her figure. An opera house crowded with fur-wrapped society matrons would envy such a balcony. Despite years of rapt window-gazing, Mrs. Steinmetz had never dared to enter Vanderbolt’s emporium of dreams. Her creamy flesh had never known the touch of mink.

“Excuse me please, Miss,” the man in the back of the hulking automobile said. “I’d like a word with you.”

Mrs. Steinmetz snapped out of her fur-lined reverie, and shivered. It was cold. Her breath showed in puffs. She hugged her thin coat tighter, hunched her shoulders as she approached the car and the stranger inside it.

“Do you need directions, sir?”

“Pardon my indiscretion, dear Miss, but I noticed how you admire the mink coats offered for sale in that shop. Would you like to have one of them?”

Mrs. Steinmetz nearly fainted. This was only partly due to the cold, her soupy diet and post-shift fatigue. She thought her prayers were about to be answered by the Mink Fairy.

“Perhaps this can be arranged,” the man said. “Get in the car. We’ll take a jaunt uptown.”

The spacious cab was warm and smelled pleasantly of tobacco. The chauffeur was in livery. Mrs. Steinmetz mistook him for a cop, due to the hat. The man beside her was dressed in a tuxedo. The studs on his shirt glittered like diamonds, which they were.

The big car took off without a lurch, barely a sound. The driver seemed to have the traffic lights under his command. They turned green to let them shush by.

“Would you care for a cocktail, Miss? I’m afraid I can only offer you rum, but it’s damn fine rum.”

The decanter sparkled like an outscale jewel, as did the glass which the man filled with dark liquor.

“Won’t you please take off your wrap? You’ll be so much more comfortable. Allow me to help you.”

Mrs. Steinmetz blushed. She wasn’t wearing her bra. She’d busted a strap that morning, and hadn’t had time to make the repair. The other girls at the factory didn’t notice or care, and they all wore smocks anyway. Mrs. Steinmetz’s smock was on its peg in the factory’s workroom, and a rich stranger was about to help her out of her coat. She nearly flopped out the front of her calico dress when she leaned forward. Her nipples were still stiff from the cold.

“Oh my God,” the man said. “I mean, excuse me, Miss, but you have such a marvelous bosom.”

Mrs. Steinmetz attempted to cover herself. “Uhm, thank you, sir. Where we going? I thought…”

The wide, brightly lit avenues had given way to dark, pitted streets. The skyscrapers had been replaced by shabby houses with boarded-up windows. Even the snowdrifts looked black and menacing. Mrs. Steinmetz had never been so far uptown before.

A group of men stood outside a storefront whose red neon sign throbbed LIQUOR, with the U burnt out. The driver slowed as they passed. Black faces turned to glower. Mrs. Steinmetz noticed the driver was a black man too.

He poured himself another glass of rum. He poured Mrs. Steinmetz another glassful too, even though she tried to refuse. Her head was swimming. She’d only eaten a few crackers and an apple for lunch.

A tall man walked under the only streetlight still in function on a long block of vacant lots. He pushed a wheelbarrow from which several wooden handles stuck out.

“Sweet sweating Christ, look at the shoulders on him. Stop, Jim.”

The car rolled smoothly to a halt. The man leaned across Mrs. Steinmetz to roll down the window, spilled rum in her lap as he did so.

“Hey, big fella. Get over here a minute. I wanna talk to you.”

The giant set down his wheelbarrow, wiped his hands on his jacket. His voice was a low whisper from the grave. “Whatchoo want?”

“Nothing like that. All you gotta do is have some fun with this pretty lady here.”

“No one around here wants them. Get in.”

There was barely room in the back seat, though it had seemed broad as a football field just a moment before. Mrs. Steinmetz felt dangerously crowded. The man smelled of dirt and sweat. They drove past a ruined church, a ghostly former schoolyard.

“Whip it out,” the man in the tuxedo said.

The man sighed and fumbled the front of his pants. Mrs. Steinmetz gasped.

“You’ve got the wrong idea, girly.” He narrowed his eyes at her bosom.

Mrs. Steinmetz nodded, knelt on the carpeted floor of the car, and pulled down the top of her dress.

“You Jew-girls have a natural talent,” the rich man said.

“Miss,” the giant whispered, “you gonna make me…”

The huge black man threw back his head.

The rich man lunged. The car filled with moans of horrible delight.

Outside the nearest subway entrance, Jim the driver handed Mrs. Steinmetz a mink coat wrapped in plastic, fresh from the cleaners.

That fur still hangs on Mrs. Steinmetz’s wall. She never wore it once.