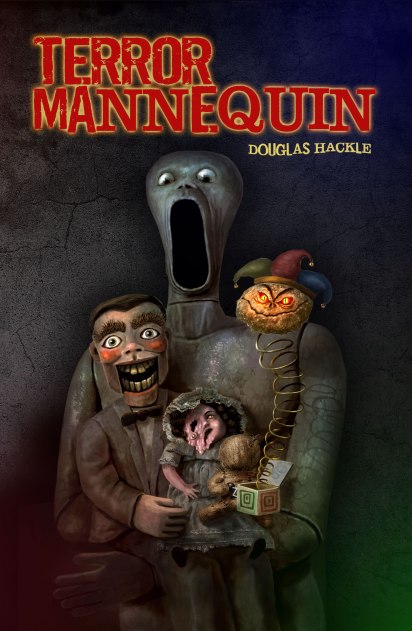 Douglas Hackle (aka Big Daddy D, aka D-Eazy, aka Tha D-Child, aka Tha D-ster, aka Tha Big Dippa, aka Douggie-Style, aka Tha Douginator, aka The Dougerizer, aka Dazzlin’ Dizzy-D McNasty, aka Dig-Dug McDoogenstein McDrizzle, aka DJ Dougzilla von Chillmasta, aka Fyodor Dougstoevsky, et al.) is up to his old tricks again and possibly a few new ones with the release of his latest novel, TERROR MANNEQUIN.

***
Forty-year-old Glont Lamont is a longtime employee of Fun 4-Life Corporation, where he gets paid good money to play videos games, watch TV, get drunk, get high, devour pizza, ride the company roller coaster, take long-ass naps, and toss off like a madman in an insane asylum. There’s only one problem: Glont’s sick of his job! Nowadays, all he really wants to do is work long, grueling shifts 7-days-a-week doing any sort of awful, backbreaking, tedious, demoralizing, soul-crushing, severely undercompensated labor.

But with Halloween just a few days away, Glont has more important things to worry about than his workplace woes. Namely, he must take his two “freak” nephews out reverse trick-or-treating, which is a form of annual ritualistic tribute whereby the cruel townspeople force his nephews to walk door-to-door on Halloween night to hand out candy to people instead of receiving candy themselves.

And this year, the last stop on the trio’s reverse trick-or-treating itinerary is Fallingwater—built on a natural waterfall, Frank Lloyd Wright’s world-famous architectural masterpiece is now closed to the public and allegedly haunted by an evil supernatural entity known as TERROR MANNEQUIN…

“If you want a Halloween read unlike any other, you’re gonna wanna pick this one up.” –Gregor Xane, author of Brides of Hanover Block