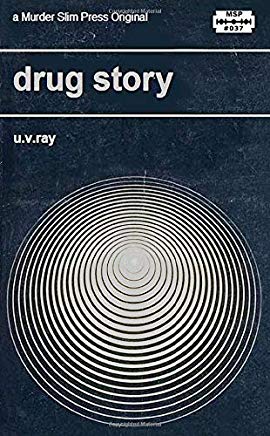 Imagine Bret Easton Ellis’s debut taking place in the early 90s, narrated by drug dealer Rip (albeit a philosophical, much less moneyed Rip), and set in Birmingham City, England as opposed to Los Angeles for an approximation of u.v. ray’s latest novel from Murder Slim Press. Rendered with the author’s trademark disregard for punctuation, drug story is an audaciously underground book in both content and style.

Narrator Mark Costine is an alienated young man who sells drugs at bars and nightclubs. He refuses to work a straight job as this would entail doing “sum thing i don’t give a flying fuck about.” On the surface he couldn’t care less about the big issues.

Costine lives in a flat above a “closed down an boarded up” restaurant. His druggie friends are named “Superfast” and “Electric.” When the former dies of an overdose, Electric and Costine shoot speed at their deceased pal’s wake.

Still, for all his jadedness and punk nihilism, Costine is an intensely passionate individual. He claims to not “give a fuck bout anything” but this doesn’t jibe with his many extended rants. He most definitelydoesgive a fuck. Otherwise, he wouldn’t spend so much time ruminating on what he sees as a sick society. A man of contradictions, he likes “man made things more than nature,” yet marvels at “undeniably beautiful” stars and a “beautiful sunrise of amber.”

Early in the novel Costine says he “never had anyone to share anything with, an never wanted no one either,” but the morning after having sex with ex-girlfriend Samantha he betrays his vulnerability: “. . . the following cold morning after she’s gone again her lipstick stain left on the wine glass sitting on the table next to the bed compounds my sense of loneliness. i feel utterly alone an empty . . .”

There’s a crime subplot concerning a bouncer who confiscates Costine’s product and is subsequently whacked in a drive-by shooting. This neo-noir element adds a sense of impending doom to the proceedings. Costine’s supplier, a one-eyed thug named “Slant Eye Joe,” is responsible for the hit; perhaps our narrator will be a marked man if he ever tries to leave the business. Not that this is likely to happen. As Costine states: “drugs are not the contagion. drugs are the antidote.”

ray has stated that this is his last novel. If this proves to be the case, then he has definitely exited on a strong note.